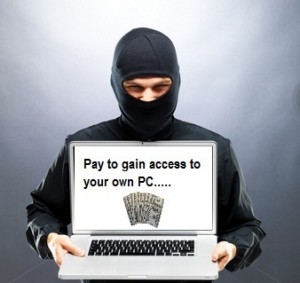 As its name implies, ransomware is a type of malware or virus that denies you access to your machine, essentially holding your data hostage until you complete a survey or pay a fee in order to unlock and use your device. Traditionally posing a threat to PCs exclusively, ransomware has recently been detected in iPhones, iPads, and Mac computers as well as in Android mobile devices.

There are several ways through which ransomware can attack your gadget. One way is via attachments to emails. Another is through exploiting security flaws in an installed application or in your device’s operating system. The aforementioned CryptoWall virus’ preferred avenue of incursion is through fake update notices for applications like Adobe Reader and Java. Even advertisements on major websites could be harboring ransomware. Whereas no gadget is immune, PCs running Windows XP are especially vulnerable to ransomware, as Microsoft ended support for XP in April.

When it comes to ransomware, infection is only the tip of the iceberg. Ransomware uses sophisticated techniques to extort users into paying money. One strain of ransomware assumes the identity of the FBI or your local police department and demands that you pay a fine through legitimate money transfer service like Green Dot MoneyPak or anonymous services such as BitCoin, to avoid prosecution for a bogus Internet law infraction and regain access to your device. Victims of a ransomware outbreak in Australia report their iPhone’s “Find My iPhone” feature’s alarm wailing as a message demanding a money transfer via PayPal appeared on the screen.

How to Fight Back

If ransomware is holding your data captive, do not call Liam Neeson to rescue it and definitely do not cave to its requests! Contact Geeks on Wheels.  914-562-1800.